Since you’re officially taking the time to check out The Fling Report, I guess it’s only right for me to share why I’m reporting what I am to you today. First and foremost, I want you to know that the Local Milf Selfies website is not at all what you think it is. In fact, I’ve seen the LocalMilfSelfies.com selfies website on more than one occasion but didn’t decide to try it until I had a strong urge to bang an older woman. Well, sure enough, I dove right in and eventually determined that it was something that I was losing sleep over – NO LIE.

That’s part of the reason why I’m writing this today. I want you to know what this is all about before you decide to jump in and disappoint yourself. 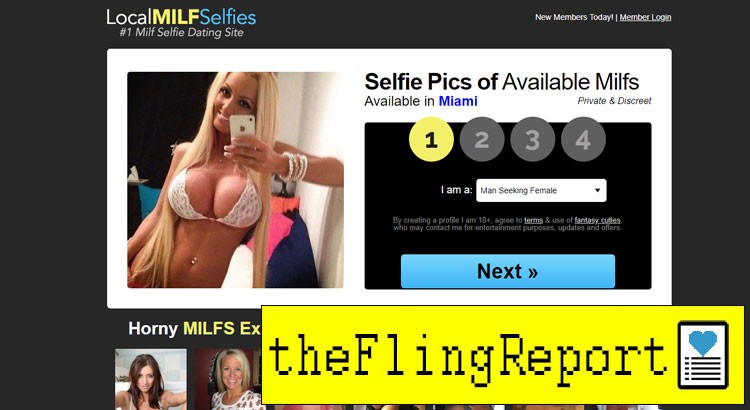 Here’s the nonsugar coated version of things for you…

It just doesn’t make a whole lot of sense that so many women are going to be willing to post those. You don’t have to go by common sense, though. A little sleuthing and you can figure out exactly what’s going on with this site.

That’s all the proof you need to know that they’re fake. What’s happening is that the site is paying for the images and using them to create fake profiles. It’s what the site is based on and it’s how they make all of their money. If you come across a profile, it’s almost a given that it’s not real.

The reason they do this is to send you messages from the profiles. You’ll be getting a ton of them. When you go to see who sent it. You’re going to see the appealing nude images. The problem here is that you won’t be able to respond to a single one of the images unless you upgrade your account to premium access.

It’s going to be a recurring charge that won’t stop until you take the time to go into your settings and cancel it for yourself.

Once you upgrade, though, you’ll be able to see the scam in progress. No matter how many messages you respond to, you’re still never going to hear back from the women. Once again, all of the profiles are fake and the messages are being sent by auto bot programs.

It’s all done just to get you to upgrade your account. It doesn’t matter whether or not you stick around on the site. They’ve already gotten your payment and that was all they were after. The scam works on so many people that the site is able to stay in business and turn a profit.

Most, if not all of the profiles are created by the people who run the site. They only want to trick you into upgrading your account and handing over your money. After that, they don’t care if you stick around. They’ll simply move on to the next person and get him to do the same exact thing.